Warning: "continue" targeting switch is equivalent to "break". Did you mean to use "continue 2"? in /nfs/c08/h02/mnt/117509/domains/nguan.tv/html/blog/wp-content/themes/suffusion/functions/media.php on line 669

Warning: "continue" targeting switch is equivalent to "break". Did you mean to use "continue 2"? in /nfs/c08/h02/mnt/117509/domains/nguan.tv/html/blog/wp-content/themes/suffusion/functions/media.php on line 674

Warning: "continue" targeting switch is equivalent to "break". Did you mean to use "continue 2"? in /nfs/c08/h02/mnt/117509/domains/nguan.tv/html/blog/wp-content/themes/suffusion/functions/media.php on line 687

Warning: "continue" targeting switch is equivalent to "break". Did you mean to use "continue 2"? in /nfs/c08/h02/mnt/117509/domains/nguan.tv/html/blog/wp-content/themes/suffusion/functions/media.php on line 692

Warning: "continue" targeting switch is equivalent to "break". Did you mean to use "continue 2"? in /nfs/c08/h02/mnt/117509/domains/nguan.tv/html/blog/wp-content/themes/suffusion/functions/media.php on line 697
 Uncategorized » Nguan / Blog 
Warning: Declaration of Suffusion_MM_Walker::start_el(&$output, $item, $depth, $args) should be compatible with Walker_Nav_Menu::start_el(&$output, $item, $depth = 0, $args = Array, $id = 0) in /nfs/c08/h02/mnt/117509/domains/nguan.tv/html/blog/wp-content/themes/suffusion/library/suffusion-walkers.php on line 0

“The purpose of art is, in the end, to find beauty, and by that to share an intuition of promise. …Are there scenes in life, right now, for which we may conceivably be thankful? Is there a basis for joy or serenity, even if felt only occasionally? Are there grounds now and then for an un-ironic smile? Every artist and would-be artist should, I think, recognize a responsibility to try, without lying, to answer those questions with a yes.” – Robert Adams, in an interview with Joshua Chang, published in the Winter 2009 issue of Aperture. 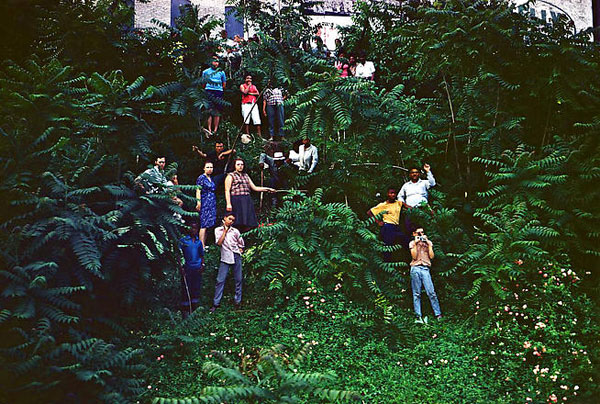 Paul Fusco’s “RFK” is my favorite photo book of the year.  On June 8th 1968 a train carried Robert F. Kennedy’s body from New York to Washington DC.  Up to a million people lined the tracks along the route as they waited for a glimpse of the train and a chance to pay their last respects.  Fusco, then working for Look magazine, was a passenger on board and snapped hundreds of pictures from the train as it sped past the onlookers.  These photos have just been collected into a handsome volume by Aperture and contain many shots unpublished in the project’s two previous incarnations.

The book’s sombre context imbues “RFK” with a powerful sense of heartbreak, but the individual photos are about so much more than the impact of the man or his assassination.  As I flipped through “RFK,” examining each of the figures along the tracks and studying their expressions, gestures and dress, my overwhelming reaction was not sorrow but wonder.  Yes, there are women kneeling in prayer,  proud military men in salute and mourners hysterical with tears.  But mostly the pictures show the ordinary man, woman or child simply returning the gaze of the photographer with a delightful variety of reactions.  There are scowling nuns, smiling nuns, curious kids in swimsuits, families on lawn chairs, men in full baseball uniforms, video camera-toting retirees.  A family stands in a straight line, from tallest to shortest.  Dozens joyously wave flags as if it were the Fourth of July.  By the end of the book , as the funeral train approached its destination and the figures in the photographs become abstract blobs of color in the fading light,  it’s clear that by covering the circumstances following a senseless death Fusco has created a shimmering work about the living, and life itself.